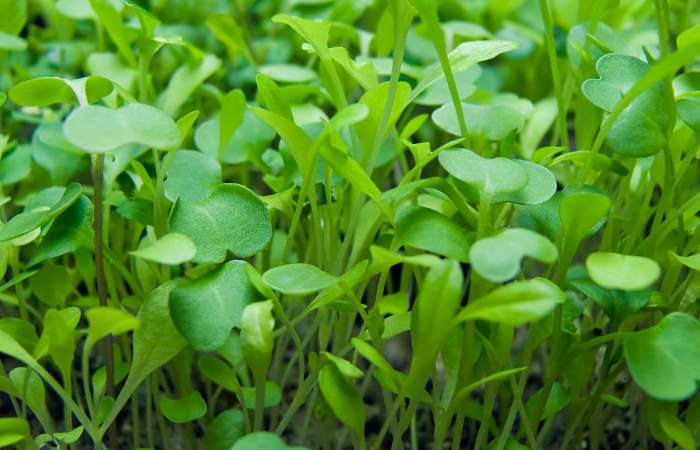 Microgreens have exploded in popularity since their introduction to the California restaurant scene in the 1980s because of their strong flavor and visual appeal.

Both fine dining and home chefs use them to add some sweetness or spice to their dishes or to garnish a meal with a unique look.

Microgreens are typically 14 days or younger before harvested, these little sprouts are grown until the first set of true leaves grows on them, differentiating them from sprouts (microgreens vs sprouts), which have no leaves, and “baby greens,” which are harvested between 15 and 40 days old once their true leaves have matured a little more.

We have also covered the best microgreens to grow at home to help you make sense of the many types and options available.

Microgreens have been so well received by the palates of culinary enthusiasts that they can now be found at specialty grocery stores across the country.

These tiny leafy greens are much more than just miniature versions of full-grown salad ingredients, though. Microgreens have been shown to be significantly more nutritionally dense than their mature counterparts, providing some unique benefits that “adult” greens don’t.

When microgreens first began to be used, only a handful of greens were commercially available. These were arugula, basil, beets, kale, and cilantro.

As more people began appreciating the complex flavors and benefits of these greens, more varieties began to be produced for sale.

Almost any type of vegetables can be harvested and eaten as a microgreen, and some have become very popular. Some of the most consumed microgreens include those from the following families:

You should never eat microgreens from the Nightshade (Solanaceae) family, however, as these include toxic alkaloids that can make you very sick. Nightshades include eggplant, peppers, potatoes, and tomatoes.

Microgreens have many benefits that consumers can enjoy, including their intense and unique flavors and rich nutritional content.

While not all microgreens are created equal, many varieties have been shown to have up to 40 times more vitamins, minerals and antioxidants than their full-grown counterparts.

Broccoli microgreens, for example, were shown to have higher potassium, calcium, magnesium, iron and zinc concentrations than the mature vegetable.

Another great benefit of microgreens is how easy it is to grow them. They don’t even require any special lighting and can be grown in any plastic container with a few inches of soil.

You don’t even have to be a great gardener to get a good harvest.

All that’s needed is to keep the sprouts alive long enough to develop their first leaves, usually a couple of weeks, and you’ll have yourself a few servings of your very own microgreens.

Growing microgreens offers almost anyone the opportunity to grow nutritionally dense food for themselves and their families quickly and easily.

The unique flavor profiles of microgreens cannot be ignored either. Their flavors are often richer representations of what their full plant has to offer. It’s almost as if the whole flavor of the plant was squeezed into a bite-sized leaf.

Microgreens can be added to pique the flavor and complement almost any dish, adding a dash of sweetness here, a bit of spice there and every other flavor in between. They can be used to lighten the flavor of heavier recipes or add a robust flavor to lighter meals.

Microgreens can even be used to kick up the flavor of drinks and cocktails in a truly unique way. Micro basil, mint, sage, and others can be added to both alcoholic and nonalcoholic drinks, adding a new, greener twist to some of our favorite beverages.

Why Are Microgreens So Expensive?

When purchasing microgreens, you may have noticed the hefty price tag on even a small container of the most basic of microgreens mix.

While prices can vary depending on whether you’re getting your greens from a grocery store or the local farmers market, microgreens do tend to command higher costs.

The reason for this is due to the cost of growing them at a commercial scale.

You can grow your microgreens at home for a fraction of the cost of purchasing them and enjoying fresh, organic greens daily.

Do You Need Special Seeds For Microgreens?

Not at all! Microgreens are grown with the same seeds you use to grow full-sized plants. If you want basil microgreens, for example, use regular basil seeds and just harvest them right after their first set of true leaves has grown.

The only reason you may have heard people talking about “microgreen seeds” is because companies have sprung up selling rare and tasty varieties of greens in bulk, especially for microgreen growers.

You can use any veggie seeds you have to grow your very own microgreens at home, though.

Do Microgreens Grow Back?

While most microgreens won’t regrow after being cut, there are a few varieties that will.

Pea shoots, for example, will sprout back up after being cut, but this is often more the exception than the rule. Even if a plant does regrow, it will often grow back stunted.

Most of the time, it just makes more sense to replant new greens instead.

Can You Eat Too Many Microgreens?

Just like vegetables, there isn’t really a limit on the number of microgreens you can eat. Eating large quantities will only ensure your body gets a high dose of vitamins, minerals, fiber, and antioxidants.

Like with any other food, though, you shouldn’t eat anything but microgreens. A balanced diet that includes adequate sources of proteins and carbohydrates is necessary to maintain a healthy lifestyle.

Can Microgreens Make You Sick?

Microgreens sometimes get lumped in with sprouts, which have gotten their fair share of negative attention.

Eating sprouts raw has been known to cause food poisoning in some people, often because the root is eaten along with the sprout.

Sprouts are often grown hydroponically, so the roots exist in a moist environment in which mold, fungus, and bacteria can grow and proliferate.

When the whole sprout is eaten raw, these pathogens are also consumed, possibly compromising your health.

Microgreens, on the other hand, have a couple of advantages over sprouts.

For one, they are usually grown in a dry growing medium, not in water, reducing the growth of dangerous microorganisms.

Secondly, the roots of microgreens aren’t eaten. Microgreens are harvested at their stem, so any possible pathogens are left below the soil where they belong.

Microgreens, unlike sprouts, can be eaten raw without making you sick. Like with any other vegetable, there is always the risk of possible cross-contamination during growing or harvesting, but the risk with microgreens is no greater than with lettuce.

Microgreens are a delicious and nutritious way to eat your leafy greens and spice up your meals.

They can be grown by almost anyone with just a little extra space on their kitchen counter, closet, or outdoor garden. They even make for a beautiful garnish to almost any dish or drink.

Best of all, they offer the high nutritional content of sprouts without the risks of contamination. If you haven’t already, grow some microgreens yourself and get in on this tasty trend!