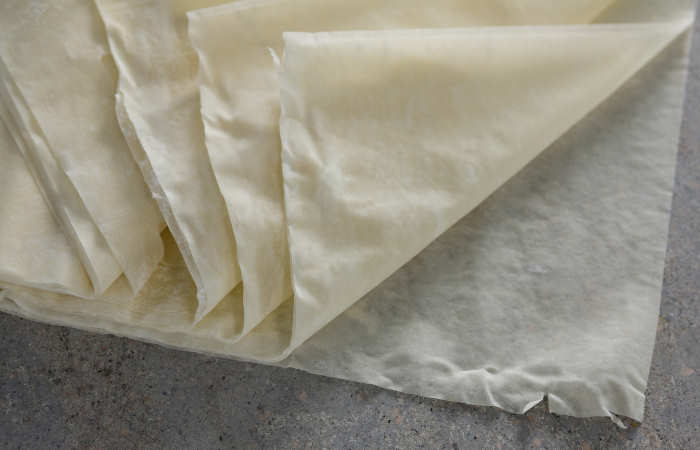 Compost-loving gardeners have considered the possibility of putting their overused wax paper into their compost piles and letting nature take its course.

But is wax paper compostable or even biodegradable?

The answer is that although it’s better to keep it out of your compost bin, wax paper is in fact biodegradable and some kinds are even compostable if you’re willing to put in the time and effort to do so.

Wax paper has many uses around the kitchen, from rolling out dough to wrapping up sandwiches. Although wax paper can be reused a handful of times, it’ll eventually outlive its usefulness and leave you wondering what’s the most ecologically friendly way to dispose of it.

Most waste disposal services won’t accept wax paper for recycling since it can’t be processed along with regular paper, so other than just throwing it away in the trash bin, what else could you do?

Is All Wax Paper The Same?

Although all wax paper serves the same purpose, wax papers can be made in a variety of ways. There is, of course, bleached vs. unbleached paper wax paper. The type of paper used won’t affect its compostability as both kinds of paper are compostable on their own.

The most important difference between wax papers is one you often won’t find printed on the box and might have to contact the manufacturer if you really want to know: the kind of wax used.

Some brands of wax paper use soybean wax while others use paraffin to coat their paper.

Of those that use paraffin, it’s important to find out whether their paraffin is derived from vegetable oils or if it’s petroleum-based instead. What’s in the wax will let you know whether composting is a good idea or not.

Other Types Of Wax Paper Items To Consider

While the materials mentioned above make up a vast majority of the wax papers you’ll find commercially available, a more ecologically-friendly wax paper material has been developed. Scientists at the USDA Agricultural Research Service have developed a technique to produce a vegetable-based, non-wax coating for wax paper from a plentiful corn protein.

The protein, called zein, repels water and is inexpensive to mass-produce, making it a great candidate as a wax coating replacement. It is also considered biodegradable and won’t leach dangerous chemicals into the ground as it breaks down.

Why You Might Not Want To Compost Wax Paper

Although biodegradable, wax paper isn’t easy to compost. In some cases, it’s not even recommended to try. Depending on the kind of “wax” used, composting it at home can even add potentially toxic or carcinogenic substances to your compost, which can later end up in your home-grown food.

You should never compost petroleum-based wax paper or any other material that may contain petroleum or petroleum by-products.

Although some of the lighter petroleum molecules can be broken down, this is only possible if the correct microorganisms are present in your soil, which isn’t always the case.

Even under the most favorable conditions, only about 90% of oil-based molecules can be broken down, as the remaining 10% is made up of larger, more complex hydrocarbons that aren’t biodegradable.

Hydrocarbons, well known for their carcinogenic effects, can easily find their way into food if they’re present in agricultural soil in high enough concentrations. You definitely don’t want any petroleum-based chemicals in your compost or garden.

Wax paper that uses vegetable-based waxes is perfectly safe for composting, but the process can take much longer than you think.

The same properties that make wax paper waterproof make it a tough target for bacteria and other decomposers to break down. So while it will eventually decompose, it will take many, many years for it to do so.

Other Ways To Dispose Of Wax Paper

If you’re an avid baker and hate the thought of your disposed wax paper sitting in a landfill for generations, don’t despair. The best way to reduce how much trash litters our planet is by cutting down on how much you throw out.

While wax paper isn’t recyclable, there are a couple of things you can do to keep wax paper from ending up in the dump.

First, remember the three Rs. Although it isn’t recyclable due to its waxy coating, you can still reduce how much wax paper you use on a regular basis by substituting it for recyclable or waste-reducing alternatives.

You can also try to reuse your wax paper as many times as possible. The same properties that make it waterproof allow it to be easily cleaned up and reused.

If you’re really serious about composting, you can make a second compost pile to allow the wax paper to break down slowly over time once it’s no longer reusable.

Don’t expect to have usable compost for a few years, though, so maybe consider a more a hands-off composting technique such as cold composting for this project.

Wax paper can be really useful, but its lack of compostability can be a big downside for people who both love baking and their gardens.

If you’re determined to use and try to compost wax paper, though, make sure you opt for the petroleum-free variety at the check-out line.

The last thing you want is to end up with dangerous oil molecules in those delicious blueberry muffins.