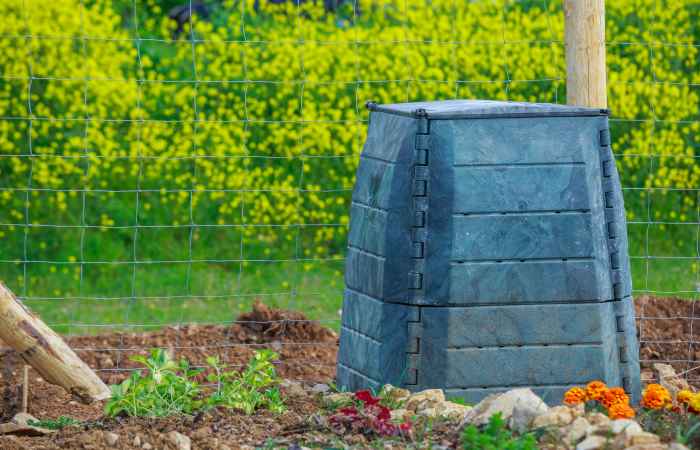 If you aren’t composting at home already, it’s never been a better time to get started. Composting is gaining popularity, and so many people are joining in on this eco-friendly practice.

According to the EPA, about 30 percent of what’s going to the landfill should be getting composted instead. That’s millions of tons of trash that we could be transforming into fertile soil instead.

So next time you’re about to throw out a banana peel, think about starting a home compost pile instead!

Why Is Composting Important?

Composting breaks down of kitchen scraps, yard waste, and other organic waste through the natural process of decomposition and transforms it into nutrient-rich dirt that can be used to grow a strong, healthy and productive garden.

Plants suck out the nutrients and minerals from the earth as they grow and can sometimes leave the soil dry and depleted.

Composting reverses this process and imbues new life into your garden by returning all the lost nutrients back into the ground.

Instead of piling more waste into your local dump, composting takes something that’s seemingly garbage and turns it into something incredibly beneficial.

It’s not just your garden and the landfill that will appreciate your compost either. Composting helps the environment out too by reducing the number of greenhouse gasses in the atmosphere.

When organic waste breaks down at the dump, the whole process happens without oxygen, unlike in your compost pile. This anaerobic decomposition releases a mixture of gasses that’s around half methane and half carbon dioxide.

Composting at home won’t just reduce the amount of waste your family sends to the landfill, it’ll allow you to cut back your carbon footprint too.

The reasons why you should be composting at home don’t end there, though. Composting has so many short and long-term benefits for your family, your garden, and your community that everyone should be doing it.

Below we will go over the most useful benefits that composting can offer you.

Instead of pouring synthetic fertilizers and other chemicals on your garden plot, consider using homemade compost to feed your plants instead.

Chemical fertilizers seep into groundwater or end up in local waterways through runoff, contaminating our water supplies and causing ecological problems like algae blooms and oxygen dead zones.

Compost contains the perfect balance of nitrogen, phosphorus, and potassium (N-P-K) that plants need to grow and be productive, along with all the microorganisms that will keep your soil healthy.

By using compost instead of synthetic chemicals, you and your family can eat organic fruits and vegetables without having to spend a premium on these at the grocery store.

Retain Moisture in Your Soil

A healthy layer of compost in your garden bed is a great way to retain moisture in your soil.

Compost will absorb water and reduce the need watering, keeping your plants’ roots happier and more hydrated than they would be in regular soil.

Keeping your garden well-composted will make your plants hardier during periods of dry weather.

Build Up Your Soil Quality

All those nutrients, salts, minerals and productive microorganisms that compost returns to the soil not only feed your next crop of fruits and vegetables, but also stay in the ground and benefit future harvests as well.

Regular composting will result in your garden is incredibly nutrient-dense and inoculated with all the beneficial microbes and fungi that plants need to produce plentiful harvests.

If enough people compost around the world, we could turn our whole planet into a real garden of Eden instead of the drained and barren desert that conventional agricultural practices leave behind.

The nutrient-rich soil that composting produces also helps to suppress plant diseases and pests, keeping our plants and ourselves healthier in the long run and maximizing how much food we can produce.

Composting can help your family save money on multiple fronts. As mentioned above, composting allows you to skip the organic produce aisle at the grocery section and grow your own chemical-free food for a fraction of the cost.

Having to water less will also help you keep more money in your pocket by cutting down your water bill. If you have to pay for your trash pick-ups, cutting down on how much trash you produce will save money too.

By making and using your own compost, you can stop spending on store-bought compost, mulch, soil, and plant food, increasing your total savings as well.

While it may not seem like much at first, the larger you scale your composting operations, the more money you’ll save overall.

Composting is both a fun and educational activity that you can do by yourself or with your whole family. Being able to transmute a pile of what most people consider rotting garbage into rich, fertile earth can make anyone feel like a powerful alchemist.

Composting can also be a great opportunity to teach children about the basics of gardening, decomposition, microorganism, and the nitrogen cycle.

No matter how you choose to do it, composting will help you gain a greater appreciation for food, all while feeling proud at your accomplishment.

Can You Use Too Much Compost?

It’s possible to have too much compost for a variety of reasons. This is especially true of manure-based compost which contains higher levels of phosphorus than plant-based compost.

Too much phosphorus in the soil can make it difficult for your plants to take up iron and manganese, as well as being toxic to the mycorrhizal fungi that help plants with their nutrient uptake.

Soil that’s more than five percent organic matter by weight can also make plants grow too quickly and not produce enough natural pesticides, leading to spikes in pests and disease.

You can avoid these problems by using homemade plant-based compost instead of manure compost, and not adding more than three inches of compost to your garden beds each year.

Still, plant-based compost will be a much healthier addition to your garden than synthetic chemical-based fertilizers could ever be.

Can You Compost Peanut Shells

Neighbors Weeds Spreading To Your Lawn