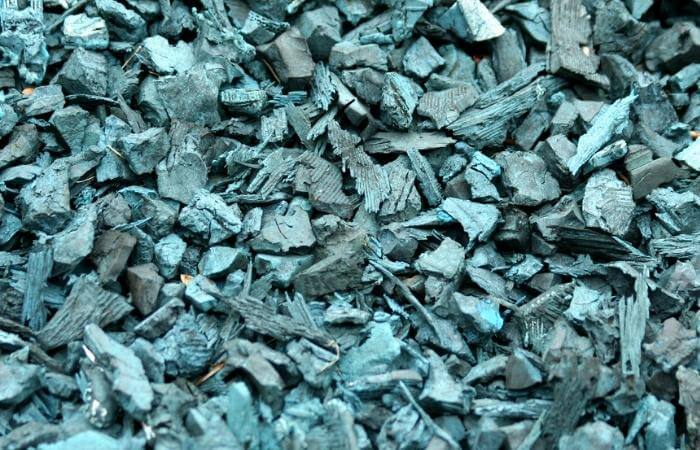 Rubber mulch is convenient, but is it safe for plants?

In general, rubber mulch is safe for plants, but to help clarify the issue, I did some research and put the details in this guide.

By the end, you’ll have all the information you need to decide if using rubber mulch is the right choice for your garden!

Why Use Rubber Mulch?

Wood mulch gets faded and thin in only a year or so, making your whole garden look drab.

Refreshing the mulch involves hours of backbreaking labor, hauling and spreading it around your plants.

Rubber mulch initially is a larger investment, but it quickly pays for itself after a few years because you don’t need to keep replacing it.

Most homeowners will require 20-40 bags of mulch to complete their yard.

A bag of quality rubber mulch will cost about $7. While there’s less material in rubber mulch bags versus wood mulch, you need less product to cover an area properly.

Rubber mulch is heavier than wood mulch, so you aren’t raking or sweeping it back into the planters after rainfalls.

When you aren’t losing a portion of your mulch to runoff or wind, you can spend your time on other gardening chores instead.

Seeds will blow or fall into your planter beds, but rubber mulch will reduce the chance they will germinate as the material doesn’t hold water.

Wood mulch absorbs moisture and holds it for a long time. Any seeds that sit upon the wet wood mulch will soak up the water and germinate quickly, leaving you with weeds to pull.

Recycling vehicle tires is an excellent help to the ecosystem, so supporting the cause by buying rubber mulch will make you feel like you’re doing your part.

Keeping tires from the dump and using them instead to beautify your planters is a wonderful way to repurpose the material.

Placing wood mulch around your home’s perimeter is common, but it invites ants and termites.

Once the pests set up residency around your home, it’s only a matter of time before they migrate inside and start chewing up the wood framing.

Rubber mulch holds no appeal for most insects, so it’s safer to use around all the structures on your property without worry of bug damage.

Here are some more rubber mulch benefits along with the cons of using the product:

How Is Rubber Mulch Made?

Rubber mulch is made by recycling old tires, which is helpful for the environment as they create such a large amount of landfill waste, and burning tires creates harmful pollution.

The practice of recycling tires began in the early 1990s for use as a soft playground cover. After a time, companies perfected the technique to transform the tire rubber into something that resembles wood chips.

The tires start by going through a shredder. After the shredding, the material passes over strong magnets that capture small pieces of wire left from the tire tread bands.

Once the rubber is free of contaminants, the material is treated with a dye, sealed to prevent fading or transfer of the color, and put into bags for shipment and sale to home improvement centers around the country.

How Long Does Rubber Mulch Last?

Rubber mulch can last for well over a decade, if not for the life of your home. Synthetic rubber can take 50 years or more to decompose, so it makes sense it should last in a garden setting for 10-15 years with no issues.

When people think about rubber mulch lasting, they also consider the look of their planter beds.

Once the mulch fades, it may look unappealing, and you’ll want to add a fresh layer to keep your garden looking neat. Most companies warrant the rubber mulch color from fading for 10-12 years.

The only other reason you’ll need to redo rubber mulch around your landscape is that extreme weather such as intense flooding or hurricane-strength winds washed or blew the material away.

Does Rubber Mulch Get Hot?

Yes, rubber mulch will absorb heat and get hot under direct sunlight exposure.

Tests on an 89°F day show that rubber mulch hit a temperature of 154°F, which you certainly don’t want to walk across barefoot!

The surprise is that other objects outside also hit high temperatures, including a wooden deck at 149°F and a plastic lawn chair at 140°F.

Rubber mulch isn’t much more dangerous than other surfaces, and you’re less likely to have a reason to walk on it versus your wooden deck.

Most bugs find no benefit to living or feeding in rubber mulch, as there is no moisture or nutrients to sustain life.

Ants and termites will look elsewhere for natural wood material, and other bugs will either burrow down into the soil to access organic material or crawl away.

The only insects found to like the environment rubber mulch provides are female Asian cockroaches or those in the nymphal stage of life.

The attraction to rubber mulch for these insects is more about the small space gaps between the chunks that provide a safe harbor for young roaches.

Yes, rubber mulch can catch on fire under the right conditions and release a thick, black cloud of smoke.

On the other hand, it takes effort to start rubber on fire, so a lit cigarette or direct flame touching the mulch for an extended period is necessary to start ignition. It takes temperatures of over 700°F to start a car tire on fire.

If rubber mulch does catch on fire, the heat will be very intense, and it’s hard to extinguish the flames.

Synthetic materials go into car tires, so toxic chemicals end up in rubber mulch as a result.

After the dying process, the sealing of the mulch to prevent color fading helps prevent toxic leaching chemicals into the soil, but some will leach out over time.

What can happen that’s concerning is sunny days when the rubber mulch bakes under the sun’s ultraviolet rays. Gases can develop that are toxic to humans, especially for people already sensitive to environmental conditions.

Often the smell is odorless, so to be safe, you should try to avoid using rubber mulch extensively, especially in children’s backyard play areas.

Can You Put Rubber Mulch Over Wood Mulch?

Sure, you can put down a layer of rubber mulch right over the top of wood mulch, but it may cause problems.

As wood mulch decays and fills in the small gaps in the rubber mulch, weeds will take hold.

If you want to reduce weeds down the line, rake up wood mulch or lay down a fabric weed barrier over the top of it before putting down rubber mulch.

Is Rubber Mulch Better Than Wood?

For the health of your plants, wood mulch is better than rubber mulch.

Wood mulch is organic and will break down and release beneficial minerals and nutrients into the soil.

Is rubber mulch safe for plants?

Yes, rubber mulch is safe for plants when you keep the layer thin and monitor your soil conditions.

Rubber mulch is a great product that helps reduce landscaping chores, but it does have some drawbacks. I hope this guide helps you decide if rubber mulch is suitable for your garden!