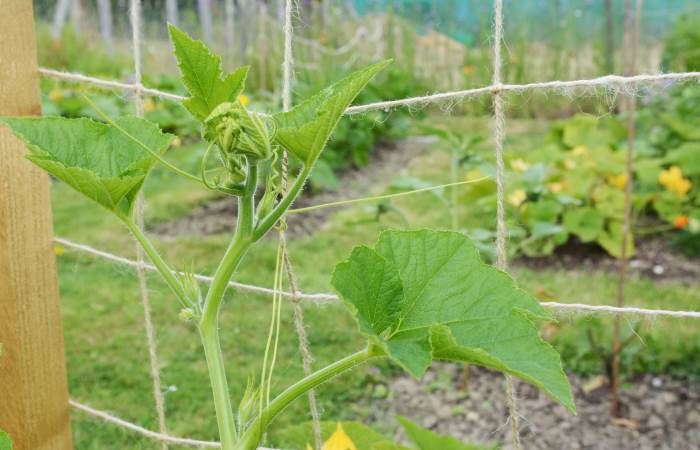 As you plan what to grow in your garden next season, consider adding vertical garden vegetable options to your layout.

Climbing vegetables give gardeners the ability to maximize their space by growing upwards along posts, trellises and even fences.

While most vegetable vines are annuals, there are even a few perennial vining veggies that you can grow year-round if you live in temperate or tropical zones. Below, you’ll find some of the best, and tastiest, vegetables that grow on vines.

Annual vines are prolific growers during the warm season but will die back once the first frost hits.

Adding them to your garden is well worth it, though, as they produce some of the most delicious and popular vegetables that will keep you and your family well-fed all summer long.

Some of the following climbing vegetables can also be grown during cooler weather and can be planted in spring or fall.

Tomato plants are one of the favorite trellis vegetables of gardeners everywhere. Tomatoes are a great vertical garden vegetable and, especially those of an indeterminate variety, have a strong vining behavior.

Not sure what the difference is? Check out our determinate vs indeterminate tomatoes guide.

Tomatoes usually need some kind of support to keep them upright, and while most gardeners use a cage or a stake, tomato plants can be trained to grow on a trellis or even hung upside down.

A properly trained vining tomato will be much more productive than one left to grow on its own.

Depending on the length of your growing season, a tomato vine can grow anywhere from 4 to over 10 feet in length.

There are a wide variety of sizes, flavors, and colors of tomatoes available to choose from, from tiny bite-sized cherry tomatoes to the monster beefsteak and everything in between.

If you’re looking for a tasty and easy-to-grow vining plant for your garden, tomatoes are the way to go.

Pole bean vines are a great option for gardeners with limited space.

These climber vegetables only grow to about 10 feet in height and can do well in containers. They’re considered sweeter and more flavorful than bush beans and even have a longer harvest window.

Since they grow upward, they’re much easier to harvest than other beans, and their flowering vines help to beautify your vegetable garden.

Another vining legume, peas are rapid and forgiving growers that don’t demand much attention. They are one of the best options for a container garden but also do well planted straight into the ground.

Most peas grow to around 3 feet tall, so caging them is encouraged to support their growth.

Peas don’t need the full sun to grow and do well in partial shade. They are also well-suited to cooler weather and should be planted in the early spring or the fall.

Here are other shade loving vegetables to consider.

In some areas with milder winters, they can even be grown between December through February.

With so many varieties to choose from, cucumbers are another wonderful plant to include in your vining garden.

While there are bush varieties available, vining cucumbers are known for being more productive throughout the growing season.

While cucumber vines can be allowed to spread on the ground, it’s recommended to trellis them whenever possible.

This will help to better support their growth, save garden space, make it easier to harvest and keep your cucumbers clean and pest-free.

Trellised cucumber vines can climb as high as 6 feet and require full sun and consistent watering to grow cool, crispy and delicious cucumbers.

Both summer and winter squash varieties are vining plants that produce prolific and delicious vegetables.

Summer squash form short and manageable vines 2 to 4 feet in length that don’t need to be supported.

Winter squash, however, produces long and quick-spreading vines that can reach 10 t0 12 feet long. They can be grown vertically to save space as well as keep them safe from pests, including the squash bug.

A very popular vining vegetable, pumpkins grow on annual vines that can reach 12 feet or more in length. There are many varieties of pumpkins, often bred for taste, size or aesthetics.

While some of the smaller pumpkins can be grown vertically, many varieties produce fruit that is too heavy to be supported by a trellis.

Even those that can grow upward will require you to add netting to support the developing fruit.

A single pumpkin plant can sprawl over 50 to 100 square feet of garden space when grown on the ground.

Most of the following vegetables are perennials only in tropical and subtropical climates but can be hardy growers that may even survive in southern US states or areas with mild winters.

If grown in containers, they may even be able to be brought indoors to keep them alive during the cold season.

Often used as a garden ornamental, this perennial runner bean produces dried beans with wonderfully vivid and varied colors and patterns. Even the leaves, green beans and roots of this plant are edible!

The upward growing vines of this climber vegetable can grow anywhere from 6 to 15 feet tall and produce edible bright red flowers that will attract all kinds of pollinators to your garden. Its bean pods can reach up to a foot in length.

Its tuberous roots can be dug up before the frost hits and brought indoors. Replanting the root in the spring will yield a plant that will flower much sooner than one planted from seed.

This tropical vining gourd of Mesoamerican origin produces pear-shaped vegetables that grow well in subtropical and moderate climates. The fruit can be eaten raw or lightly cooked and can be used in recipes calling for summer squash.

It requires good drainage, plenty of moisture, and full sun to produce a plentiful bounty. It is a productive grower that will produce long vines and should be grown on a trellis or even a pergola.

If grown in a container, it can be brought indoors when the frost threatens to strike.

Often considered more of a bath sponge than a vegetable by most people, this vining perennial can actually produce a tasty squash-like fruit when harvested young.

It can be eaten both raw, like a cucumber, or cooked into a variety of dishes, including a delicious curry.

It will produce medium vines with tendrils that will attach itself to almost any growing surface. If grown in a container, it can be brought indoors to overwinter before the onset of frost.

Left on the vine, the fruit will ripen and dry to become a natural sponge.

Another tropical perennial, malabar spinach vining plant can still be grown in milder climates. It produces a plentiful harvest of tasty leafy greens that won’t stop until the onset of the cool season.

It grows well in a container, but its vines must be given plenty of support for it to grow well.

It should be trellised and given plenty of moisture, as it will blossom when dry, causing its leaves to become bitter. It can easily be grown from cuttings, and stems can be pruned and replanted into containers before the frost, where they will re-root and grow a new plant.

It can be eaten cooked or raw and used just like spinach in any dish.

Whether you have limited growing space or simply want to be able to maximize the space you do have, the vining vegetables on this list would make a great addition to your garden.

Not only do vertical garden vegetables use the sun and your space more efficiently, by growing upwards and keeping your plants off the ground, but you can also make sure your vegetables stay disease and pest free.

Growing upward is also a magnificent way to incorporate your vegetable garden with your landscaping aesthetic, giving your growing space a unique and natural look as you utilize all the available space and turn your garden into a productive food forest.