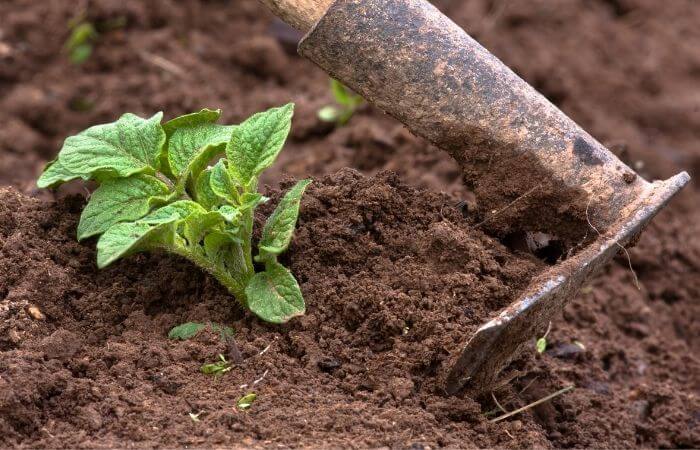 Do you want to grow potatoes in your home garden, but don’t know how to hill potatoes or why this task is so important?

Hilling is a term that describes the task of piling soil up around the base of a potato plant as it grows. Hilling correctly means your potato harvest will be more abundant. Doing it wrong can lead to a wasted crop.

Luckily, you can learn the right steps for hilling potatoes right here in this guide. I also answer common questions about hilling so you can plant your vegetable garden with confidence!

How To Hill Potatoes

If you have the room, leaving around 36 inches of space between your rows of potatoes will make hilling easier. Having extra soil to pull from between your rows makes the process much faster than trying to haul in dirt to cover the potatoes.

You don’t need to perform hilling until the foliage reaches around six to eight inches tall above the soil.

Please remember that determinate potato varieties grow their tubers in a single layer and do not continue forming new tubers as the plant grows.

For this reason, you don’t need to hill determinate potato varieties, but you do need to make sure there is adequate soil over the tubers, so they have no exposure to sunlight.

Once your plants are tall enough, put on some heavy-duty gloves, grab a hoe or a rototiller set to dig about three inches deep, and begin hilling your potato rows.

The easiest way to gather dirt is to pull the soil from between rows (away from the root system of growing garden plants) and push it up over the potato plant vines, leaving only the very top leaves out in the open.

Go down one side of the row, pushing dirt up the plants, then finish the other side to cover the vines except for the top few leaves completely.

Try to cover the vines with several inches of firmly-packed soil to keep newly growing tubers cool, but leaving the top leaves out allows them to absorb sunlight and keep the plant growing strong.

About two to three weeks after the first hilling, it’s time to hill again. The plants should have grown another four to eight inches during this time. You can choose to make the hill with available dirt or opt for hilling with straw.

Make sure you keep some top leaves of the potato vines out in the open and cover everything else with several inches of material.

Straw hilling is very popular for gardeners who don’t plan to perform any more hilling after this stage. Once the straw is covering the new growth, sprinkle some dirt on top to fill in any holes where sunlight could penetrate and cause greening of the tubers.

Straw is very lightweight, making the final harvest of the tubers faster and less of a strain since you won’t have to dig through deep layers of dirt to find the spuds. Using straw also allows tubers to grow unobstructed by the pressure of heavy soil.

Some potatoes, especially those with long growing seasons, will keep on forming more tubers if you keep mounding up the soil around the foliage.

If you see enough new growth and you have the inclination to do so, feel free to hill a third or even fourth time if plant growth is vigorous. Again, using only dirt is perfectly fine, but expert growers tend to use a straw layer for end-stage hilling.

TIP: If your potato variety keeps growing well all season but you run out of soil for hilling or your hills are becoming too tall to remain stable, consider trying a vertical growing system next year.

Using grow bags or a stackable potato growing planter can alleviate backbreaking hilling chores. Instead, you will keep layering dirt on top of new growth by dumping it into the vertical planter as necessary.

When To Hill Potatoes?

You need to watch the growth of the potato plant foliage to choose the best time to hill potatoes. Generally, you want to begin hilling once the plant is at least six or so inches tall.

Hilling will force new tubers to form off the stem yet keep the foliage growing upward toward the sunlight. As the potato plant vines grow upward again five to six more inches, you can hill more dirt over the new growth. Repeat this cycle until the growing season ends.

Because hilling requires a large amount of available dirt, many gardeners choose to start their potatoes in a trench, using the earth from the trench to cover the seeds and for the first hilling.

What Does Hilling Potatoes Do?

As you can see, hilling potato varieties that continue to form new tubers on buried stems is critical for success. The more hilling you perform, the more substantial your potato harvest will be.

Do You Need To Hill Potatoes?

You don’t always have to hill to harvest a potato crop. Whether your potato variety is indeterminate and determinate is the real indication of the necessity of hilling.

Some gardeners hill twice no matter which type of spud they are growing, while some gardeners never hill at all and are happy with a meager harvest in exchange for never having to toil with the hoe.

The key is keeping all potatoes under dirt or straw as they form and grow to maturity, so sunlight does not cause irreparable damage.

Checking over the soil coverage conditions of your vegetables every couple of days is a great way to spot trouble before it ruins your whole crop.

How Often Should You Hill Potatoes?

You need to hill your potatoes at minimum once a season for good results. Two or three times will provide more potatoes at harvest if you grow indeterminate varieties such as Canela Russet and German Butterball.

You can hill potato plants again when you see them three to six inches above the surface of the soil or when the stems begin drooping over from being too tall. On average, expect it to take around two weeks to see this amount of new growth.

The steps on how to hill potatoes are very straightforward but require extra time and effort and enough soil in your garden area to complete this task.

I hope reading this guide was helpful, and you got answers to some of your hilling questions. Once you see the fantastic results hilling brings to your potato harvest, you’ll know the extra work was worth the effort!