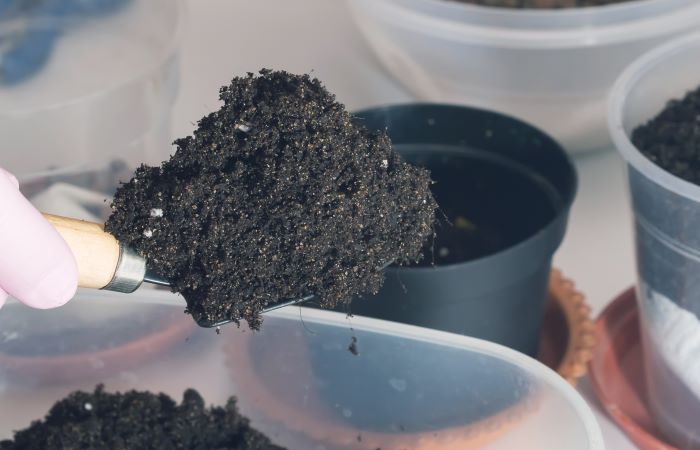 Ever find an old bag of potting soil while cleaning out the shed or garage and were unsure if it’s still okay to use?

Me too! I had to know if potting soil can go “bad,” so I did some research to find and share answers to important questions about potting soil in this guide.

Growing amazing plants indoors and out requires a top-notch potting soil. Knowing when potting soil is bad and how long it lasts is crucial for the success of any home gardener.

I hope this article helps you make smart decisions when it comes to buying, using, and storing potting soil. Let’s get started!

However, potting soil contains a mixture of ingredients and is rarely stored under proper conditions, so over time, you can expect to see changes in:

The longer a potting soil sits, the more the organic matter breaks down. This can result in a “dustier” texture to the soil or a denser consistency.

Nutrients in potting soil, whether naturally derived, or from fertilizer will degrade over time.

Potting soil left on a shelf (indoors or outdoors) has a higher chance to dry out or get soaked by rain, both of which alter the soil.

I buy bags of potting soil throughout the growing season. Sometimes I use them all up, and sometimes I have bags left. Let’s get details about whether or not bagged potting soil goes bad.

Expect the quality of opened bags of potting soil to last about six months before it begins to lose beneficial features.

The soil itself is almost always acceptable for general use in your garden, but potted plants won’t receive the same level of nutrients found in fresh potting soil.

Peat moss or other organic material in potting soil are actively decomposing even if you never open up the bag.

For optimal benefit, use unopened bags within a year or two. After that, it’s better to use the soil elsewhere in your yard and not in your planting containers.

Potting soil with fertilizer additives like Miracle Grow Potting Mix (Miracle-gro) typically feed plants from two to six months. But what about the soil in the bag, does it expire? Let’s find out!

If enough moisture gets into an open bag of Miracle Grow potting soil, the coating on the slow-release fertilizer begins to deteriorate. Within a year, the fertilizer dissolves.

If plant roots aren’t present to intake the nutrients, they dissipate into the atmosphere.

So technically, the fertilizer portion of the potting soil does expire, but the soil is still good.

Unopened bags of Miracle Grow potting soil kept in proper storage conditions should keep for five years or more. As long as the bag stays dry, the fertilizer cannot release the nutrients.

The critical factor here is you have no idea how it was stored before purchase. Err on the side of caution and use up any Miracle Grow potting soil within a year or two.

Used potting soil has the biggest chance to go bad since old plant material in the soil encourage mildew, fungus, mold, and pests to take hold. After one season, used soil has minimal nutritional value left.

Toss the used soil into your compost pile and use fresh potting soil for next season to avoid damage to new plants.

Related | What To Do With Old Potting Soil

How To Tell If Potting Soil Is Bad

Here are the signs that tell you if potting soil is bad.

If your potting soil smells very strong like rotten eggs, it was probably sitting in water. Bacteria in the soil quickly spreads under wet conditions.

Older soil is also more dense, which removes the air pockets that keep good bacteria active. Bacteria that grow in anaerobic conditions put off quite an odor.

Spread out the stinky potting soil and let the sun dry it, which helps kill off the harmful bacteria. You can use it safely once it dries out.

Hate those pesky little bugs coming out of potting soil?

These little guys are fungus gnats. The gnats enter the potting soil bags through tiny holes and lay eggs. The gnats are annoying but shouldn’t cause severe harm to mature plants. Seedling roots are most vulnerable to damage by fungus gnats.

You can look online for ways to control the gnats or spread the potting soil outside away from your garden area.

Can Potting Soil Get Moldy?

Yes, potting soil can grow mold. Mold is common in potting soil since fungal spores are naturally abundant in soil and compost.

White mold, called mycelium, is an indication of too much moisture, which frequently happens inside a plastic bag. Mold also means the bags didn’t have exposure to sunlight.

Fresh air and sunlight kill off mold quickly. Spread it out on a sunny day until it dries and it’s safe to use.

Never use moldy potting soil when growing from seed, as tender new growth can’t compete with the fungus.

Knowing when potting soil is bad can save you the time, money, and frustration spent when your plants perform poorly.

There’s a difference between plain soil and a soil potting mix. Knowing how to handle potting mix properly gives you the power to grow and show off those gorgeous potted plants!