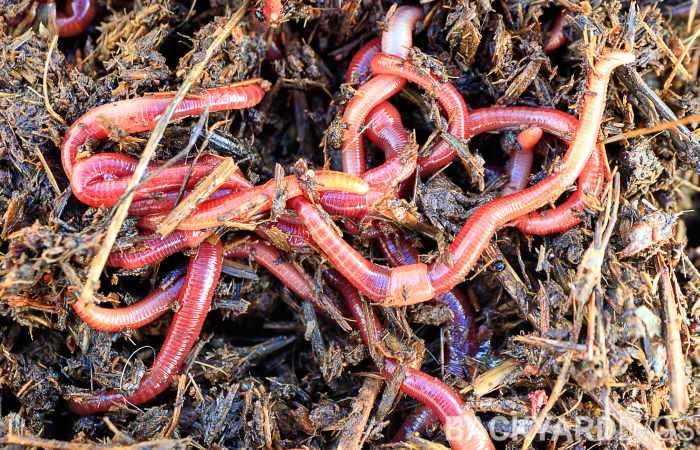 If you’re a gardener like me, you may be curious if worms lay eggs or give birth to live young.

Earthworms spend their life underground, so witnessing their reproduction cycle can be tricky. The benefits of worms in the garden got me to thinking about this question, so I did the research to find out the answer!

I wrote this article to explain how worms lay eggs and answer questions about the process, so you can stop wondering how our little garden helpers multiply and grow.

How Do Worms Mate?

A worm’s anatomy includes a clitellum, which is the part we recognize as an orangey or light pink band near the head that stands out from the rest of the worm’s body.

When worms are around six weeks old, this clitellum forms. Inside the clitellum are both female and male reproductive organs.

When mating happens, two worms join together by coming in contact at the clitellum, with their heads pointed in opposite directions.

Once the worms touch and connect at the clitellum, they both exude a mucous membrane that envelops them completely. This mucus protects the worms as they mate. Inside the membrane, sperm passes from each worm to the other.

Each worm then stores the sperm from the other worm in their seminal receptacle. Once this sperm storage happens, the actual mating is complete.

The worms then separate and go on about their life and the next stage of reproduction: forming the cocoon and filling it with eggs and sperm.

Related | How To Raise Nightcrawlers

How Do Worms Give Birth?

Worms do not give birth since babies come from eggs and are not live born. I suppose you can consider forming and depositing the egg-filled cocoon “giving birth.”

The process of forming a cocoon full of worm embryos starts when the worms separate after mating.

At this stage, each worm forms a new mucous tube, which then passes over the area of the worm that contains its eggs.

The eggs stick to the inside of this mucous tube as it travels toward the head of the worm. As the tube reaches the seminal receptacle, the sperm comes in contact with the eggs.

This tube then becomes a cocoon as the worm begins to back out of it.

The ends of the tube seal off as it works its way off the worm, leaving behind the sperm and eggs so fertilization can occur.

Inside the cocoon are, on average, one to 20 potential worm embryos.

Gestation can take between 2-11 weeks, with the mucous cocoon material providing crucial nutrients to sustain the developing hatchlings.

After gestation is complete, the new worms emerge from the cocoon and burrow into the soil.

If the cocoon senses conditions are not right for birth, such as soil that is too dry, it can remain dormant for many months, waiting for conditions to improve before hatching.

Each cocoon full of embryos will differ slightly in looks depending on the species of worm that creates the sac.

Some are very small, like a grain of rice or a tiny seed. Most earthworm eggs start a yellow or whitish color and turn a deep yellow or gold shade as gestation progresses.

The European nightcrawler forms a lemon-shaped cocoon that can hold up to 20 worm eggs. No matter the species, less than half of the potential hatchlings will survive until birth.

Eggs of all sizes will harden and deepen in color to brown then become dark red or burgundy just before they’re ready to hatch.

I have seen these tiny cocoons while working the soil around my garden, but until now, I never knew what they were.

I am looking forward to seeing them again and checking to see their color and how close they are to hatching.

Newly hatched baby worms are nearly translucent in color with a whitish tone. Most are between one-half to one-inch long at birth.

Check out this video to see for yourself a red wiggler worm baby hatching from a cocoon.

The bodies of baby worms are skinny, much like a thread, which means you can easily overlook them while digging in the soil.

Sometimes an area of dirt can have an abundance of hatchlings, and the ground can appear to have a hairy fungal growth if you don’t look closely.

After several hours, a newborn worm gains hemoglobin and begins the transformation from white to pink and even red. At this stage, the worms look more like tiny versions of the adult, but without a clitellum band.

One way you can tell if a worm is a baby is to look for the absence of a clitellum. It takes several weeks of growing for a worm to mature enough to develop a clitellum and be able to reproduce sexually.

Do Worms Have Genders?

Before writing this article, I certainly never took the time to consider the gender of earthworms. In fact, I knew very little about the life cycle of worms at all.

Now I know that worms are simultaneous hermaphrodites, which means a single worm will have both female and male reproductive organs. These organs are housed inside a worm’s clitellum once they develop sexually between one and two months of age.

Earthworms still require another worm to come along to mate and reproduce. Worms rely on each other for sperm so they can provide the means to fertilize their eggs.

I find this dual-gender concept fascinating and see how having both mating partners giving “birth” an excellent way to increase the number of successful worm hatchlings.

There are other ways worms can survive as a species when no other worms are available.

Some species of worms are parthenogenic hermaphrodites, which means they can produce offspring relying solely on their sex organs. This trait is helpful when conditions are not favorable for mating.

Worms can also regenerate portions of their segments if it gets cut off for some reason. The regeneration process works best if only the tail end of the worm detaches, but there are cases of more drastic detachment and regrowth.

Worms do lay eggs, and their reproduction is a mix of interesting processes that showcase how nature finds a way to keep worm populations healthy.

I hope you enjoy this article about worm reproduction. I know I’ll be taking the time to be more observant of the stages of worm eggs and hatchlings as I tend to my gardening duties in the future.

After learning about the life cycle of worm cocoons, I appreciate even more all the benefits worms bring to my compost and garden, and I hope you do too!