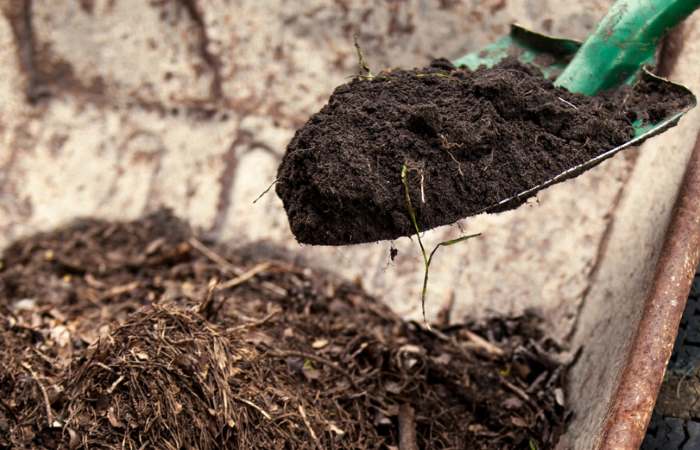 If you’re starting up a new gardening or landscaping project, you may be curious as to whether you should use compost or topsoil to fill up your garden bed.

After all, you want to make sure to grow your fruits and vegetables in the best soil possible.

So which one is best, topsoil or compost?

Turns out topsoil and compost need to work together to grow a lush and beautiful garden, and you’ll need both of them equally if you want your landscaping to be the envy of the neighborhood.

Keep reading below if you want to get the dirt on your garden soil.

The Difference Between Topsoil And Compost

Topsoil and compost are two sides of the same coin and depend on each other to keep a garden healthy and well-fed.

Neither compost nor topsoil would do a very good job of growing plants on their own and need to be properly balanced in order to ensure a beautiful garden.

Topsoil, as the name implies, is the top layer of soil in an area. It rests directly above the subsoil and can sometimes have a layer of decaying matter right on top of it.

Topsoil was once a deep, nutrient-rich layer dense in organic matter. However, this is rarely the case anymore.

Nowadays, the topsoil in most developed areas is dry and contains very little of this necessary organic matter.

Topsoil is often carted off and sold by the truckloads during construction and land clearing projects, leaving only the nutrient-poor subsoil behind.

Modern agricultural practices often deplete the topsoil as well, leaving it dry, barren and prone to eroding away.

This is where compost comes in. Compost is the organic matter that most topsoil is lacking. Made from decomposed natural materials, compost is rich in the nutrients, minerals, and beneficial microorganisms that plants need.

Compost completes the cycle of nutrients returning to the soil that happens in nature and allows us to improve our native soil.

The benefit of adding compost to our topsoil improves the soil’s structure, reduces compaction, increases water retention, and even improves drainage at the same time! This is what makes compost so special.

Does Compost Turn Into Soil?

Soil is an interesting subject, and to understand whether compost turns into soil or not, we need to first understand what soil actually is. Most of us think of soil as a single “thing,” but in reality, soil is a complex mixture of multiple substances.

If you look at soil under a microscope, what you’ll see is a combination of sand, silt and clay along with minerals, water, organic matter, and microorganisms.

Soil also contains a significant amount of gases such as oxygen, carbon dioxide, and nitrogen, all crucial to plant development.

As compost breaks down in soil, it turns into a finer substance known as humus. This humus is the organic matter part of soil that is usually found at concentrations of one to five percent.

The amount of organic matter in soil changes as plants extract it from the soil to grow and later die, decompose and return to the soil.

So does compost turn into soil? Well, not really. Soil is made up of a lot of different materials, out of which compost is a very important part.

However, you can have soil that’s depleted of organic matter and it will still be soil, but compost by itself is only a part of what you need to have soil.

Can I Use Compost Instead Of Topsoil?

Just like compost doesn’t turn into soil, it can’t be used instead of soil either. If you need topsoil or potting soil for your garden project, you can’t simply replace it for compost. Compost is used to amend and improve topsoil, not replace it.

Compost is incredibly nutrient-rich, which is great for giving plants the nutrition they need, but there can be too much of a good thing.

Using pure compost instead of soil can result in plants experiencing nutrient or fertilizer burn, which will make your plants unhealthy.

Too many nutrients in your growing medium can prevent plants from being able to absorb water or even the nutrients themselves.

High levels of nutrients can also change the pH of the growing medium to something that your plants can’t grow well in.

This is why it’s best to mix compost into your topsoil instead of trying to plant directly in nothing but compost.

Is Topsoil Cheaper Than Compost?

Like any other commercially available product, the price of topsoil and compost will often depend on their quality.

In general, though, topsoil will be cheaper than compost as it takes more time and effort to produce compost than it does to collect topsoil.

If you’re buying compost regularly to improve the quality of your topsoil, it can definitely get expensive.

Buying either topsoil or compost in bulk can definitely save you some money in the long run but it will cost you more upfront.

It’s no secret that you can get both topsoil and compost absolutely free, however. Topsoil, as we’ve mentioned, is the top layer of soil which covers most of planet Earth.

This means that you probably have a large amount of topsoil already available to you right outside your home.

Make sure to double-check the quality of your topsoil before using it, as you don’t want to use soil that’s contaminated with oil, pesticides or other nasty chemicals for your food garden.

Compost is can also be acquired for free if you have the patience to make it yourself. All your kitchen scraps, yard waste, and any other biodegradable plant-based material can be composted right at home.

Depending on the method you use, you can have usable compost in around a month without spending a dime.

What Is The Best Ratio Of Compost To Soil?

The best way to use your compost is to mix it in with your native topsoil and plant right on top. To do so, add two to three inches of compost to the top of your soil and work it into about a depth of six inches.

If you’re making a raised bed, however, you’ll want to mix equal parts topsoil, compost, and sharp sand. The sand will allow for proper drainage.

If you’re planting in pots, you can either mix four parts topsoil to compost or simply top-dress the top of your pot with compost.

Topsoil and compost work hand-in-hand to create healthy and productive soil for our lawns and gardens. Neither one is better than the other. Instead, both are a necessary part of a healthy soil ecosystem.