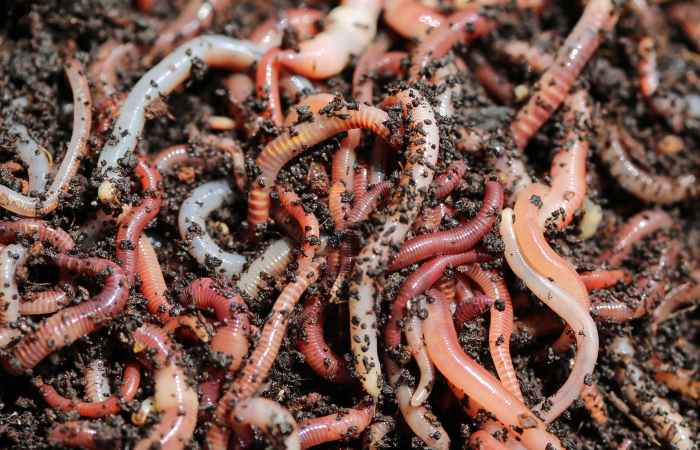 Worms are one of the garden’s most tireless workers.

They spend their days aerating the soil, boring tunnels that help water reach deep into the plants’ roots and speeding up the composting process by eating organic matter and leaving behind their nutrient-dense worm castings.

If you’ve been thinking about adding worms to your garden or compost bin, you’re not alone.

Vermicomposting, or composting with worms, has become incredibly popular thanks to the many benefits that worms bring to a garden.

Before you get started, it’s important to make sure that you choose the right worm for the job. The worm family is large and varied, and each type of worm will perform a different kind of job for you.

If you need a garden worm that will burrow deep into the ground, bringing with it water, air, and vital nutrients, then an earthworm is for you.

If you want to increase the nutritional value of your compost and speed up the process, you’ll want to get a compost worm.

Most of the time, a thriving garden will depend on a healthy ecosystem of multiple worm species working together.

Are Compost Worms The Same As Garden Worms?

Both compost and garden worms are two very different varieties with specialized tasks and purposes.

Each worm has its own strengths and weaknesses, so they must work together to increase the productivity and health of a garden.

Compost worms, as the name implies, are the kind you’ll want in your compost pile. They live near the surface of the soil, burrowing only a couple of inches and coming out whenever there’s food available.

They’re voracious eaters of kitchen scraps, yard waste, and other biodegradable organic matter and can also tolerate higher temperatures than earthworms, making them the perfect addition to any compost pile.

Garden worms are excellent diggers and highly useful at creating underground tunnels that will supply air and water to the roots of your garden plants.

They are usually solitary creatures that spend their days digging through the ground in search of rotting leaves and other decaying matter.

Although they are commonly found in the top three feet of soil, some varieties of earthworms have been known to burrow to depths of up to 6.5 feet.

The composting style you’re using will determine which compost worm to get.

Most home composters use a combination of the red wiggler and the European nightcrawler, as they will each inhabit different levels of the compost bin and effectively decompose both the top and inner segments of your compost.

Worms can easily cohabitate with each other, and many commercial compost worm kits will include a mix of multiple worm species.

Earthworms are usually already present in most lawns and gardens. If you’re looking to supplement your garden bed with earthworms, the only variety you’ll find commercially available is the common earthworm.

However, you can also add the European nightcrawler to your lawn and garden.

Although commonly used as a composting worm, the European nightcrawler burrows deeper than other composting worms and will do a great job of aerating and fertilizing your soil.

Can Worms Live In Hot Compost?

Compost worms are much more heat tolerant than their earthworm cousins. They prefer to live in warm and moist surface environments, while earthworms will burrow deep into the ground where it’s cooler.

Even compost worms won’t survive the thermophilic stage of hot composting, though, as temperatures can rise up to 160 degrees Fahrenheit. Red wigglers, for example, will begin to die as temperatures reach 95 degrees.

This is why worms aren’t well suited for hot composting methods. If you want to add worms to your compost pile, make sure you’re using a cold composting technique or have a specialized vermicomposting setup in place.

Adding worms isn’t required, as composting will happen with or without worms. Wild worms may even find their way to your compost pile on their own.

Adding worms can help speed up the process or introduce worms better suited to composting when none are present in your area.

What Is The Difference Between Red Wigglers And Earthworms?

Red wigglers are a type of compost worm, and as such are epigeic. This means that they live near the surface of the soil, in leaf litter and in compost.

They don’t make burrows but instead live, feed and breed in their surface homes. Red wigglers are slightly smaller than earthworms and have a dark red to purple hue to their skin.

Unlike earthworms, red wigglers are social worms that live in large groups. They can reproduce quickly and can form large populations in just a few months. They prefer higher temperatures and thrive on manure and decaying matter.

Earthworms, on the other hand, are solitary worms that burrow deep into the ground. They feed directly by ingesting the soil and leave behind nutrient-rich castings that help to fertilize the soil.

These are the kinds of worms that come out during the rain and are commonly found in lawns everywhere.

Can Earthworms And Red Worms Live Together?

Since they inhabit different areas of the soil, earthworms and red worms can live together without competing for resources. Earthworms will burrow deep underground, however, while red worms will stay near the surface of the soil.

Can You Use Nightcrawlers For Composting?

The common nightcrawler (Lumbricus terrestris) is an earthworm and not well suited for composting. Not only do they not consume fresh organic matter like red worms, but they also need a lot of space to burrow.

When added to vermicompost enclosures, the common nightcrawler will often try to tunnel out the bottom of the enclosure and die when unable to do so.

European nightcrawlers (Eisenia hortensis), however, make a great addition to a compost setup. They only burrow slightly deeper than red worms and are more heat-tolerant than regular earthworms.

They will ensure that the bottom areas of a vermicompost bin are well composted and won’t compete with the surface-dwelling red worms.

Where Can I Get Earthworms For My Garden?

Common earthworms can be purchased at most garden or fishing supply stores as well as ordered online, often labeled Nightcrawlers.

Nightcrawlers are often used as bait for fishing, so they’re widely commercially available. If you’re interested in purchasing European nightcrawlers, you can find them at most specialty gardening stores, as well as online.

Where Do I Get Worms For Composting?

Composting worms, such as red wigglers, are somewhat harder to find but should still be available at most specialty gardening stores, even if just seasonally.

There are also many retailers of composting worms online with multiple varieties available that will ship them directly to your home, often with guarantees that the worms will arrive alive.

Do Worms Bite? Can I Hold My Worms?

Worms do not have teeth and so cannot bite. They’re safe to handle and cannot hurt you.

How Can I Tell Different Species Of Worms Apart?

It’s difficult, but not impossible to tell worms apart. You’ll have to identify certain external features, such as their head, male pour, and clitellum.

Since they’re so small, though, you’ll need a microscope as well as a worm identification guide.

How Much Do Compost Worms Eat?

On average, two pounds of red wigglers will recycle about one pound of organic matter in 24 hours.

How Do Worms Reproduce?

Worms are hermaphrodites in which they have both male and female sexual organs. They can’t self-fertilize, however, so two worms are still required for reproduction.

After mating, both worms will produce a cocoon with up to 20 babies in each.

Castings, or worm compost, can be added directly to soil and garden beds. This makes a great top dressing for existing or potted plants or to make compost tea for watering plants with.

Before you get started with vermicomposting, you’ll want to make sure you have the right kind of worm available.

Many people make the mistake of loading their vermicomposting enclosure with earthworms they’ve dug up from their garden, only to find them all dead at the bottom of the bin a few days later.

Now that you can tell the difference between compost worms and earthworms, you’ll be able to begin successfully turning your kitchen scraps and yard waste into valuable worm castings right at home.