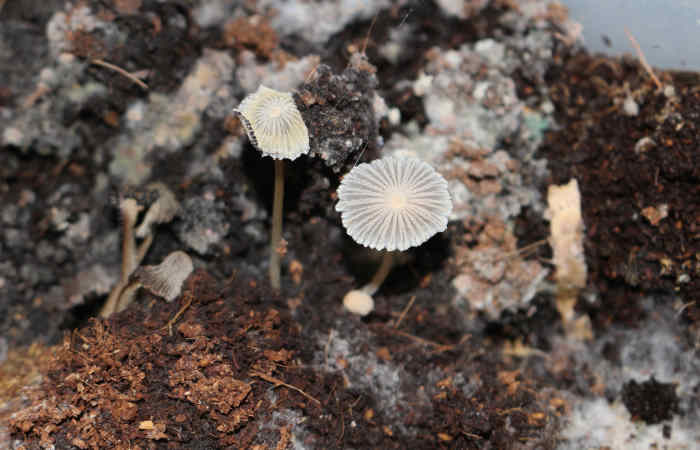 Mushrooms in our yard and garden are often a common sight, and for many people the first thought when they see them sprouting up out of the grass is how they can get rid of them.

What they don’t know is that mushrooms are actually the sign of healthy soil and are very beneficial to the home garden.

Although these tireless garden helpers aren’t producers in their own right, they fulfill a function that’s just as crucial.

Fungi decompose organic matter, such as dead leaves, rotting logs or wood chips, into usable compounds that plants can feed off.

Without decomposers such as mushrooms, complex organic materials would never break down and re-fertilize our soil. Without mushrooms, the Earth would have become a barren wasteland long ago.

Mushrooms and other fungi fill the roles of primary decomposers in an ecosystem, helping to break down dead or decaying organisms before secondary decomposers, such as insects, can finish the job.

The part of the mushroom most people are familiar with, the fruiting body, is just a small portion of a much larger underground network, or mycelium, of microscopic root-like structures known as hyphae.

These hyphae stretch into the soil to break down and extract nutrients from biomass, making it easier for plants to access these nutrients.

Read on to find out how mushrooms perform these functions and how they can benefit our garden’s soil health!

You step outside to enjoy the sunny weather after a few days of rain, only to notice that your yard is suddenly inundated by mushrooms where there had seemingly been done before.

Yet, what you’re actually seeing are just the recently sprouted fruiting bodies of a fungi mycelium that’s been present the whole time, right under your feet.

Most of the time the fungi mycelium will stay hidden underground tirelessly working to break down any organic matter it can get its hyphae on.

When the conditions are right, though, the mycelium will send out its fruiting bodies – mushrooms – out into the surface world to announce its presence and disperse its spores.

These spores will go up hundreds of feet into the air and can ride the wind for thousands of miles, eventually settling down in faraway locations in order to colonize, break down decaying organic matter and repeat the process.

For mushrooms to sprout from their mycelium undergrowth, they need a combination of high levels of shade or cloudy weather, moisture and high levels of organic matter in the soil.

When all these three conditions are present, you’ll experience a backyard mushroom explosion and find out just how many different varieties of fungi are present in your soil.

What Do Mushrooms Do?

When fungi spores land in an area, they begin to spread their hyphae in search of decaying organic matter.

Unlike other decomposers, such bacteria, which can only break down the surface layer of a material, hyphae can penetrate into deeper layers of harder materials like wood.

The fungi then start excreting enzymes that begin the process of decomposition, breaking down organic materials into their constituent compounds.

In fact, certain species of mushrooms are the only living creatures that can break down lignin, the super-tough substance that protects the cell wall of trees.

Without these fungi, dead trees and other tough to break down materials would never break down and would instead permanently litter the surface of our planet.

Mushrooms also perform another equally important but not as well-known function. Fungi form symbiotic relationships with plants known as mycorrhiza in which the fungi’s mycelium intertwines with the roots of nearby plants.

By colonizing the plants’ tissue, a fungus gains constant and direct access to the carbohydrates that plants produce, mainly glucose and sucrose, which help to fuel its growth.

In exchange, plants gain easier access to the nutrients present in the mycelium of the mycorrhizal fungus, such as iron and phosphate ions.

It is thought that over 95% of plant species engage in some kind of mycorrhizal relationship and some species are even dependent on it for their survival.

Why Are Decomposers Such As Mushrooms Considered Heterotrophs?

When some people think of heterotrophs, they only consider humans and animals as part of this category, forgetting that even when consumption isn’t visible, it’s still happening.

Heterotrophs include any organism that can’t produce its own food and instead must consume plant or animal matter to get the nutrition they need.

Heterotrophs include animals, bacteria, parasitic plants as well as fungi. Mushrooms, as we’ve seen, absorb nutrients from the organic matter they break down as they’re incapable of producing their own food.

Unlike plants, which photosynthesize the sugars they use as an energy source, mushrooms and other fungi must absorb their nutrition consuming their host or from the symbiotic relationship they have with other organisms.

Even though they free nutrients from the decaying matter they’re consuming and make it available for other organisms to use, they’re not producing these compounds. They consume but they do not produce, which makes them heterotrophs.

Related | Can You Compost Mushrooms?

How Can Mushrooms Benefit Our Backyards And Gardens?

If you do have mushrooms in your garden, don’t despair. The presence of mushrooms is the sign of a healthy garden. Since they only sprout up in soil that’s rich in organic matter, just seeing them is a good sign that you have fertile soil to work with.

This is especially beneficial if you’re a gardener, as your plants will need rich, fertile soil if you want to have a productive harvest.

Mushrooms also indicate the presence of strong and healthy mycelium in your soil, which is hard at work breaking down that organic matter into usable nutrients for your plants.

Best of all, whatever you choose to plant will become part of the mycorrhizal network and benefit from the constant exchange of nutrients with the mycelium around it.

So the next time you see a mushroom sprouting in your lawn or garden, remember to be grateful. While the fungi that have colonized your soil may not be producers, they work just as hard as any plant to earn their keep on your land.

They labor tirelessly to decompose the dead and dying, returning the nutrients held within decaying organic matter into the Earth and forming relationships that help to feed and nurture the growth of your “productive” plants.

When you bite into a juicy tomato or sweet corn grown in your garden, it’s not just the tomato or corn plant that you have to thank. Mushrooms worked just as hard to ensure that you get to enjoy a home-grown meal.

Can You Compost Peanut Shells

Neighbors Weeds Spreading To Your Lawn